Kiera gets her Happy Ending

Kiera initially came to Oak Tree in 2011 and unfortunately had really bad luck in finding a new home. From 2011-2014 she had 4 failed rehomes for varying reasons. A wilful and strong girl she was not the easiest dog but had tons of character and once she trusted you was very playful and affectionate. From 2014-2017 she didn’t get any interest, mainly due to her age, colour, breed and the fact she was quite aloof with new people.

However, her luck changed when we were contacted by a couple who were taken by Kiera’s photos and story…..the rest is in their words.

"We started looking for a dog to adopt about 12 months after our last rescue dog, Ben, died at the age of 16. We initially looked at several dogs that interested us on the Oak Tree website, but when we read Kiera's profile, that was decision made. After all the time in the animal shelter, she deserved a home of her own. An elderly black lurcher, constantly overlooked, we had to adopt her if we could!

We first met her at Oak Trees to assess how we would get along with each other - would she take to us, and would we decide she was the one to adopt? Things went well; we were a bit nervous about the process, and Kiera was quite a wilful and obstinate madam with her own set routine after so long in the shelter. But, we knew she was for us when, during the assessment as we interacted with her, she "told us" there was something hidden behind some boxes in the room. Upon checking, we found a bag of dog treats that had fallen behind them, and she wanted us to get them and feed some to her - clever, or what?

She then had a home visit with Gina, so we could see how she reacted to visiting us. On the walk with her, a local cat on the estate did attract her attention, but otherwise she was as good as gold, but needed a firm hand.  After several years in the shelter, she really required some love and guidance at an individual level to curb her enthusiasm to chase little furry things, as Lurchers are prone to do, and a permanent home to give her the security and love she deserved. 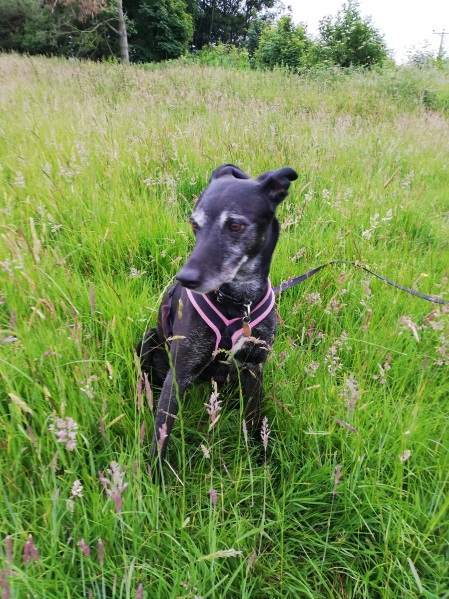 We took to her immediately, and after completing the paperwork, we took her home the following Saturday. She willingly jumped into the car, as if to say "is this a new adventure? Where are we going?" At first, she was very aloof and very suspicious of us. It had been fine at the shelter, but now it was a permanent placement with us, and a big upheaval for her. It took about 3 months before we got a spontaneous wag of the tail from her, and now, 3 years later, she is a happy, chilled-out member of the family. And what a character she is...... She is very intelligent, and has learned quite a few new words and commands. She now walks on a slack lead in a very relaxed way, and has learnt that cats aren't really worth chasing. She knows the commands "this way", "wait" and "come here Kiera", and occasionally obeys them. She has learnt new words such as "breakfast" and "sausages", to which we get a far more enthusiastic response.... She has made several doggy friends in the village, all of which for some reason seem to be boys.... She remains obstinate and defiant at times, but that's part of her character. She is a changed animal from the rather nervous and wary dog we first adopted, and now enjoys her walks in the woods and across the fields, but mostly coming home and sleeping the day away after all that exhausting exertion! She loves having her ears rubbed and her shoulders massaged, and grunts and purrs like a noisy cat, which is very amusing. If she doesn't get her own way, she can be very sulky, especially after she's been to the kennels when we go away without her. If we go out shopping, we usually return to a walking boot in her bed, or a lead that has been dragged onto the sofa to say "you dared to go out without me...!" Thankfully nothing has been chewed except one handbag (empty at the time, fortunately)!

She still has her issues, but she is a lovely friendly dog, with a pleasant nature and lots of character. Her recall is still rather intermittent, depending on what she's doing at the time, and her response to dogs she does not know can still be a bit unpredictable. But she is confident and curious, never reluctant to let you know what she wants, and a pleasure to have as part of our family. She likes sniffing, sunbathing, and swimming, or at least flopping down in ponds and streams to cool off!

It has been a pleasure to adopt Kiera, and we firmly believe that rehoming a rescue dog is a very rewarding experience as Kiera has demonstrated."

Oak Tree staff and volunteers had a very emotional reunion with Kiera when she visited with her family on one of our Fair days - everyone who had been involved in Kiera's care during her time at Oak Tree had become very fond of her and were over the moon to see her again and hear how wonderfully settled she now is in her forever home.