MENU
» About» Latest News» Ginny gets her Happy Ending

Ginny gets her Happy Ending

Ginny had been with her owners since she was a kitten but, when they had to move home, they were unable to find anywhere that would allow pets. Very sadly, after 12 years of ownership, they had to give Ginny up.
When Ginny arrived at Oak Tree she was certainly a character; she knew what she liked and would tell you what she didn’t! As an older and feisty lady, it took Ginny quite a while to find her new home. Other cats came and went to their new families while Ginny waited patiently but, after 6 months, Oak Tree was contacted by a couple who were looking for an older cat and Ginny had caught their eye!

After Ginny had been in her new home for a little while, her owners sent the following update:
“Ginny is settling extremely well and we can't believe that she has only been with us for three months. The thin strip of fur along her spine is growing back well and her bald tummy and inner back legs are now fur covered too - fairly thin at the moment but dark stripes have appeared among paler fur so we have every hope that in time it will thicken up. 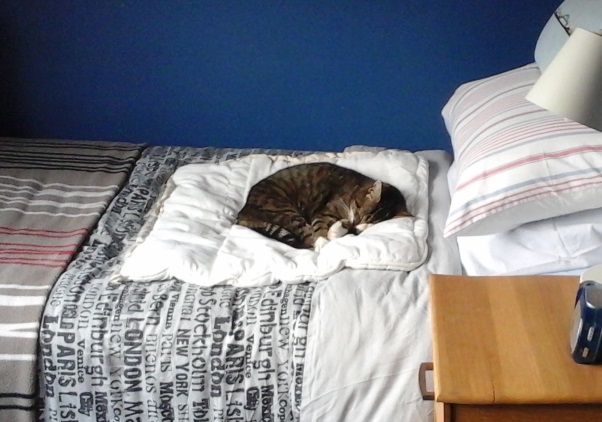 At first she was quite "hissy" and edgy, but we have tried to take things very much at her pace and she is now so much calmer and confident. When first offered the garden she did not want to go out at all but over the last few weeks with the lovely weather this has changed. At first, she was very tentative and would only go out if went too. Gradually she has gained confidence and now quite often asks to go out by herself. She does not wander, for which we are very thankful, but we do have a big garden which she loves to potter about in and has chosen a few favourite spots to sit in. 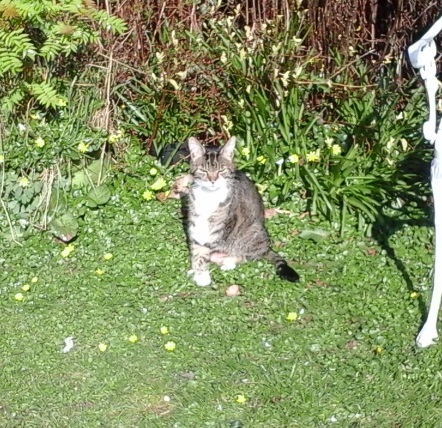 Ginny has a very good appetite and is extremely playful. She absolutely loves a pheasant feather that we attached to a chop stick (!) and trail across the floor for her to chase. She will spend hours doing this! She is so bright and intelligent. One of her favourite times is in the evening, if we sit down for an hour or two. She sits either cuddled up to me or on my husband's knee and purrs away all evening.
We think that she is very happy and we in turn are so glad that she is part of our family, she is a real little sweetheart.”

We hope Ginny continues to chase feathers as she becomes more confident in her loving new home.